Distracted driving kills. According to data from distraction.gov, “in 2014, 3,179 people were killed, and 431,000 were injured in motor vehicle crashes involving distracted drivers.

Year after year, thousands of Americans lose their lives to distracted drivers. Not just drivers texting, either.

Distracted driver incidents include activities such as:

Each of the items in the above list have been cited as the cause for an accident by the distraction.gov website based on data from the National Highway Traffic Safety Administration (NHTSA).

For fleet managers trying to increase safety and efficiency, minimizing distracted driving is a must. A distracted driver behind the wheel of one of your company’s fleet vehicles endangers not only their own life, but the lives of other motorists, valuable company assets, and your company’s reputation.

With this in mind, how can fleet professionals such as you decrease distracted driving?

Here are a few tips to help you out:

Tip #1: Get Drivers Acquainted with Routes Prior to Starting Their Drive

GPS is an incredibly useful technology and we’re all big proponents of it. But, as useful as GPS is, your drivers shouldn’t be paying more attention to the GPS screen than they do to the road.

The problem is that, when navigating unfamiliar roads, we all tend to rely a bit more on the highly accurate tracking system to tell us where to go and when to turn. So, the eyes get taken off the road for just a bit to see where the next turn is… and two seconds later there’s an accident.

One of the best counters to this problem is to make sure that drivers are familiar with the route they’ll be taking prior to getting behind the wheel. You could do this in a number of ways, such as:

These are just a few of the ways that you could familiarize your drivers with a route. In particular, having a new driver sit with an older, more experienced driver the first time they take a given route can be useful, as it allows the other driver to act as a navigator and limit the temptation to keep their eyes glued to the GPS.

Of course, this does mean paying two drivers for a trip, but it’s far less costly than a distracted driving accident. If your company doesn’t already have an official policy banning the use of cellular phones while behind the wheel, it’s time to put one in place.

Answering a cell phone or making a call while behind the wheel places the driver and everyone around them at risk. As noted by a National Safety Council (NSC) publication, when you’re driving and talking on your phone, “the brain switches between the two tasks which slows reaction time.”

Worse yet, the NSC’s research shows that “drivers talking on cell phones can miss seeing up to 50% of their driving environments, including pedestrians and red lights.”

Putting a ban on cell phone use behind the wheel sounds inconvenient, but it’s worth it to avoid an accident. If a driver must take a call, have them pull over or find a rest stop first. If the call is important, it can wait for the driver to be in a safe location first—as the saying goes, “good news can wait, bad news will refuse to leave.”

This ban should go double for texting and driving, considering just how much worse texting is as a mental and visual distraction. Watching videos or entertainment apps behind the wheel should also be out of the question for drivers.

Tip #3: Set Aside Time in the Schedule for Food & Rest Breaks and Enforce Them Driving long distances and holding to a schedule can be difficult. In fact, some drivers might try to skip long stops for breakfast, lunch, and dinner in favor of a meal on the go. However, this can be very dangerous.

Not only does this deprive drivers of much-needed rest time (and potentially lead to Hours of Service violations), eating while driving is a distraction that could lead to an accident. Eating food requires concentration and coordination that can detract from the driver’s focus on the road.

Worse yet, when food items drop or spill, the distraction factor they create increases immensely. Dropped food containers and drink cups/bottles could even fall below the driver’s feet and get stuck under the pedals—compromising the driver’s control over their vehicle.

One of the best ways to avoid the food distraction is to set aside specific breaks for drivers to pull over and take a proper meal. Building time for these breaks into the schedule is important—otherwise, drivers may feel pressured into trying to take their meals on the go.

It’s one thing to have a policy banning cell phones or food in the cab of the vehicle, it’s another thing altogether to enforce it. The truth is that when drivers are miles away from your company’s offices, they’re probably not going to worry too much about some arbitrary-sounding policy from the fleet manager.

That is, unless they know that they might have to pass an inspection at any given scheduled stop or go through a detailed review of their driving record.

A random inspection policy helps to keep drivers on their toes and curtail the worst distractions.

Setting up a surprise inspection can be relatively easy—just make sure that drivers know they’re going to be inspected in the field at some point and have a way to verify the inspector’s identity.

Reviewing driving habits can be a bit tougher unless you have a strong vehicle tracking solution, such as GPS. Even then, it can be difficult to pinpoint what, if any, distractions occurred.

You may have to check cell phone records against GPS records to see if calls were made or taken while driving. Also, you can check the GPS tracking record against the schedule to see if the vehicle stopped for long enough to give the driver a chance to eat and rest properly.

A tired, hungry driver is a distracted driver, so giving them plenty of rest is important—even if you have to make your most dedicated drivers take a break.

There are many more ways you could combat distracted driving in your vehicle fleet, such as educating drivers and setting distracted driving policies. We here at RASTRAC hope that this list of tips helps you and your drivers increase safety for your fleet. 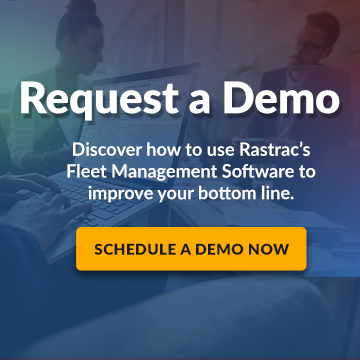 How to Improve Your Fleet's Driving Habits

The Cost of Unsafe Driving—And How GPS Can Help

3 Ways Fleet Temperature Monitoring Can Protect Your Assets This Winter