Are you using your vehicle tracking system to its full potential?

When employees leave their vehicles idling for extended periods of time or speed excessively, they’re basically pouring gas down the drain. When they’re given fuel cards, do you really know that the fuel is going into the intended vehicle? What about the vehicle’s intended purpose? How do you know that the vehicle is being used for business purposes only and only during work hours? The right vehicle tracking system can help you track all this and more. Check out these two reports that will save you thousands of dollars per year in fuel savings, possibly per vehicle.

Did you know that allowing a light duty vehicle to idle just 10 minutes per day could cost you $215 annually? Do you have heavier vehicles? How long are they being left to idle? Here is a real life example I came across on one of our demo accounts while preparing to write this blog. Never have I seen a better example of someone who needs a vehicle tracking service.

In this example, the vehicle was idling for 50 hours and 57 minutes over the last week. Using the $215 for 10 minutes per day figure, that works out to almost $0.06 per minute, which puts this vehicles cost around $180 per week, or $9,360 annually. Depending on the type of device and quantity of devices ordered, they’re probably going to spend about $150 on the device and a maximum of $19.99 per month with RASTRAC, meaning their first year savings would be almost $9,000.00 on one vehicle.

Every 5 miles per hour over 50 is like spending an additional $0.24 per gallon of gas. Have someone going 75 down those highways? Add roughly $1.20 per gallon to the already high fuel prices. 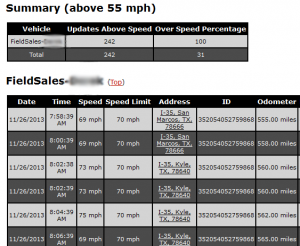 Here is another real life example from one of our sales reps (he buys his own gas, so I’m happy to allow him to keep speeding so I can use him as an example, though I do wish he’d be more safe). This guy is a speed demon and over the last week has had 78 moving updates over the posted speed limit. When I pull the report again with an absolute speed of 55mph, he had an astounding 242 moving updates where he was cruising above 55. I added up the miles driven over 55 and came up with 343 miles, topping out at 80 miles per hour. Since I know what he drives, I took a look at what he gets for gas mileage (18 miles per gallon in his 2001 Toyota Tacoma). When all was said and done (I will spare you the breakdown calculations of how many miles were driven in each speed category), I figured he’s paying almost $600 extra in fuel per year due to his speeding habits. The first year savings on breaking that habit? Almost $400 on one vehicle.

I could go on and on about how each report could save you money (utilizing the maintenance report to ensure optimal engine performance and gas mileage, using the fuel receipt report to monitor fuel purchases, taking time to review the driver performance reports for additional bad driving habit insight), but really, I think nearly $10,000 per year between two vehicle examples is quite enough to get the point across. Don’t you?

How to Reduce Your Fleet's Fuel Expenses

How to Create Maintenance Automation That Saves Time and Money