As a fleet manager in charge of snowplows, you can’t wait until the snow begins falling to get prepared. Without a detailed action plan, experienced drivers, and fully prepared vehicles, the next severe blizzard could wipe out the road conditions for days. This means more accidents, more complaints, and more headaches.

We all know winter is coming. But, when an advanced GPS tracking system is incorporated in your fleet, it’s a rare snowstorm that cannot be systematically handled. Even when the roads must be plowed repeatedly because the snowfall is heavy and unexpected, you will be able to manage the heaviest storms with the same number of drivers and vehicles. This helps improve effectiveness and efficiency, letting you do more with your snowplows while saving money.

It's Not Too Early to Be Prepared for Next Snow Season

Fleet managers across the nation are investing in GPS systems to monitor snowplow activity during their operations. These systems provide real-time data, so managers are fully informed of every vehicle’s location, speed, and direction of travel.

Managers are able to respond to problems rapidly by deploying the closest vehicle to a troubled area and plotting the most efficient route to get there. GPS tracking systems also provide information detailing times of arrival and lengths of time that a vehicle is stopped. With this information, fleet managers can efficiently monitor every driver in their fleet, keep informed of the pace of their plowing, and keep on top of dispatching them to their next location.

GPS with map overlays help fleet managers make the most efficient and effective use of their snowplow operations by detailing roads that help them plan their strategy according to priority levels. Priority levels identify the most important accessibility roads during snow emergencies. These levels typically include:

The highest priority routes are those needed for emergency responders traveling to and from hospitals, fire stations, and police stations. Bridges and steep hills that are likely to freeze are also often designated priority one.

Level three routes include residential subdivisions and all other remaining roadways. These streets are cleared only after completion of one and two.

Roads may need to be plowed repeatedly during a lengthy storm. Fleet tracking systems for snowplows have route optimization tools that allow managers to remotely track the specific times that a road was cleared, the amount of time that has elapsed since the plowing, and plan a designated time to re-plow the road according to the snow and ice conditions.

A route optimization program, such as StreetComplete by RASTRAC, features a street map overlay with colors identifying a timeline. The user assigns a specific color to mark a street that has just been plowed. Another color replaces that color after a predetermined period, such as 30 minutes or one hour. Another color will be shown when the street has not been plowed for an extended length of time.

Snowplow progress and street clearing can be remotely monitored, at a glance, by fleet managers in their offices or on the go with their smartphones. This at-a-glance view of snow clearing operations minimizes the risk of snowplows redoing areas that have been recently completed.

Each vehicle is kept on track to the next destination, and the streets are cleared methodically, with each being kept clear throughout the storm’s progress.

With the success of fleet tracking for snowplows, fleet managers are choosing to take advantage of other technological advances that make their operations better and safer. There are many options available, such as:

Onboard diagnostics are a huge asset for fleet managers. GPS systems combined with onboard diagnostics provide real-time updates about the engine performance, fuel expenditure, and emissions. Managers receive notifications about engine issues and other problems before the vehicle breaks down.

Many plows are being equipped with sensors, placed on the plows, which detect air and road temperature, friction, and identify slippery driving conditions. This not only helps to inform the public of dangerous road conditions, it helps fleet managers determine which deicing material will be the most effective, such as: 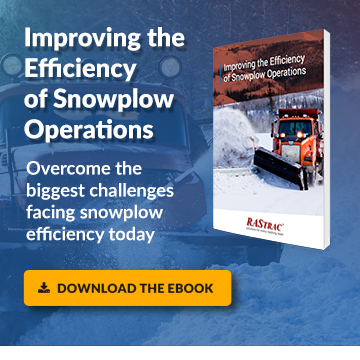